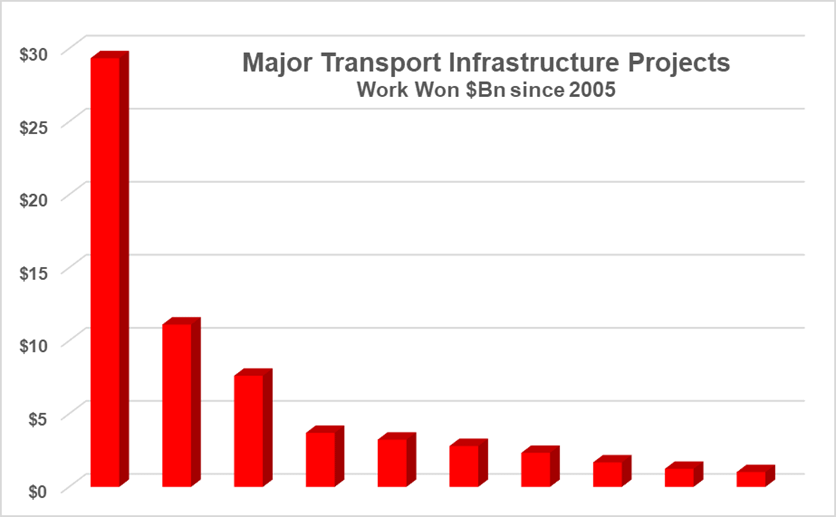 Let’s revisit the chart above in light of the extensive feedback I’ve received in response to my original article.

The chart starkly illustrates the extent of local industry consolidation that has occurred over the last 15 years. The dominance of one major player is illustrated by the size of the first column on the left-hand side of the chart.

I concluded my previous article with the question:

“What issues do you think are likely to show up in our industry?”

With thanks to all for your contributions, the following summarises the feedback I received.

Firstly, an acknowledgement. My greatest concern in assembling the article was that the feedback would focus solely on the issue of foreign ownership. Indeed, this was the main reason why I deliberately omitted the chart’s X-axis labels.

I’m pleased to report that very little criticism of foreign ownership per se showed up. Longer term industry participants would of course be aware of Australia’s extensive history of foreign involvement in the local engineering & construction industry. For decades International participants have provided local companies with financial backing, resources and connections to enable local growth and diversification as well as successful regional expansion. Indeed, and as a net importer of capital, Australia’s ongoing prosperity depends upon International participation in the industry (highlighting one of the key economic challenges created by our current COVID-19 borne circumstances).

To summarise then the issues identified by readers arising from industry consolidation:

The identified flow-on consequences that have arisen include:

To revisit the issue of foreign ownership, by its very nature Infrastructure construction work will for the foreseeable future continue to be delivered by locally sourced labour, regardless of which entity holds the delivery contract. However, as long anticipated productivity improvements begin to reshape the industry, returns will increasingly accrue to the upstream contract holders.

The answer – as pointed out by more than one reader – lies in a carefully managed and balanced approach to sustaining the ongoing health of Infrastructure engineering & construction as a critical local industry sector. As was highlighted by the chart, the concerns raised are all about balance or lack thereof. In short, an over-concentrated industry is a recipe for trouble down the track….

One key is for Government regulation to play its part in maintaining a balanced and sustainable industry with strong local capability. There is a widespread sense that it is incumbent on Governments as Buyers of major infrastructure as well as market regulators to act as “circuit-breakers” and lead a shift towards greater sustainability.

A particular Infrastructure-related Case Study worth reflecting on concerns Passenger Railcar manufacture (where I commenced in the industry as a Cadet Engineer employed by what was then the NSW State Rail Authority). Since the mid-80s, a NSW Government-supported local manufacturing duopoly comprising Goninan and Clyde Engineering has morphed into UGL and Downer respectively as importers of fully off-shore manufactured and assembled passenger rail vehicles. Competitive circumstances do change, however its hard to recognise a significant local manufacturing industry sector, reduced within a generation to providing minor support services, as a triumph of Government procurement and regulatory policy.

The good news is that there are positive examples demonstrating a way forward.

The close-to-completed $4.3Bn duplication of 155km of the Pacific Highway between Woolgoolga and Ballina engaged Laing O’Rourke and Parsons Brinkerhoff as Delivery Partners on behalf of RMS (now TfNSW) involving a range of smaller contractors as well as top-tier participants.

Southwest Connex (Acciona, NRW Contracting and MACA Civil as well as AECOM and Aurecon) as preferred proponent for the design and construction of Western Australia’s $852M Bunbury Outer Ring Road are expected to allocate approximately $300M of subcontract works to local businesses.

And the recently announced shortlisted Joint Venture parties for the upcoming tunnelling packages for the circa $10Bn Sydney Metro West project include:

I’d love to hear your thoughts on this important issue for our industry, either by reply or privately via peter@samwilkoadvisory.com.