WestConnex Roads Project or 2nd Rail Harbour Crossing – which would you choose?

The WestConnex project continues to attract heavy criticism from many quarters, particularly in relation to the in excess of $11Bn price tag. Sydney’s public transport network is also attracting significant expenditure and it is widely accepted that a Second Sydney Harbour Crossing will eventually be needed.

So which is the right major project to meet Sydney’s medium-term transportation needs?

The WestConnex project continues to attract heavy criticism from many quarters – refer for instance a recent Sydney Morning Herald article by Jacob Saulwick. In particular, the $11Bn price tag creates controversy, a cost which may yet be revised upwards subject to finalisation of how best to integrate the scheme into the existing roads network.

Sydney’s public transport network is also attracting significant expenditure with the soon to be completed South West Rail Link extension, as well as the North West Rail Link Public Private Partnership project reaching Financial Close and to be progressed under a separate configuration and operations management regime. Further significant network capacity enhancements to the existing rail system are constrained by the Sydney Harbour crossing and it is widely accepted that a 2nd Crossing will eventually be needed.

So which is the right major project to meet Sydney’s medium-term transportation needs?

So what is Westconnex?

WestConnex, as originally announced by the NSW Government in October 2012 is a proposed 33 kilometre motorway spanning the Western, Inner Western and Southern suburbs of Sydney. In concept, the scheme increases the capacity of the existing M4 and M5 roads and links them through tunnels under the Inner West. The project also incorporates urban renewal works along the Parramatta Road corridor.

The New South Wales Government claims the WestConnex motorway will bypass 52 sets of traffic lights along its full length and cut the trip from Parramatta to the CBD by 25 minutes. It is also viewed as an opportunity for developers to bring the benefits of high-rise apartments to Sydney’s Inner-West.

Recent development work has concentrated on the connections between the tunnels and the existing roads network in the North (towards Anzac Bridge) and South (towards Sutherland Shire). The most recent project announcement outlines plans for an interchange at St Peters as an “interim” measure prior to linking the new tunnels at St Peters with another tunnel under the Inner West to Haberfield within a decade. 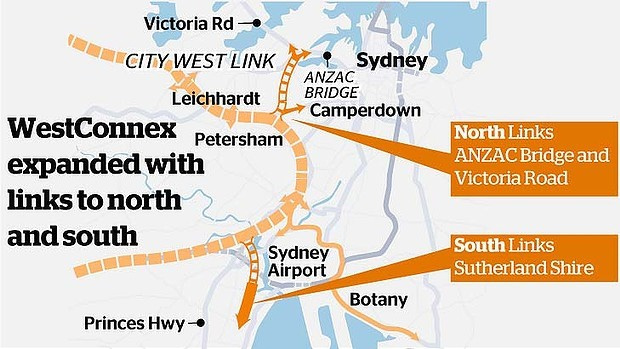 Do we need more Roads?

According to the Bureau of Infrastructure, Transport and Regional Economics’ “Traffic Growth in Australia” Research Report, roads traffic increases have “flat-lined” over the last few years across Australia, in line with a general town-turn in the economy triggered by the GFC in 2007-2008. In general however, the major roads networks have reached saturation in all capital cities with the exception of Queensland, Western Australia and the ACT. The Sydney roads network, being at saturation point, is quite sensitive to relatively small reductions in traffic volume, as evidenced by the improved travel times that occur during School Holiday periods.

So what is Rapid Transit?

The NSW Government State Infrastructure Strategy also includes a Second Harbour Rail Crossing. The project, known as Rapid Transit, is linked to the North West Rail Link PPP project and described as follows: “The reach of the new rapid transit system will be extended via a new tunnel under the Harbour linking Chatswood with the CBD, untangling the City Circle and providing a capacity boost to the Western Line.” The Government is yet to announce a price tag for the Extension project, however it is widely expected to cost in excess of $10Bn.

According to a particularly well-written treatise by Sandy Thomas, this scheme has its genesis in a plan known as the “Metropolitan Rail Expansion Program” or “MREP”. The Program was intended to cater for more frequent, faster and longer (ten-carriage) double deck trains, including long-distance expresses, on a new, separate operational “sector” of the CityRail network—the suburban components of which have since been rebadged as the Sydney Trains network—between Macarthur, Campbelltown and Leppington in the southwest and Hornsby and Rouse Hill in the North and North-West, via the Airport, CBD, North Sydney, St Leonards, Chatswood, Macquarie Park, Macquarie University and Norwest employment and education centres. 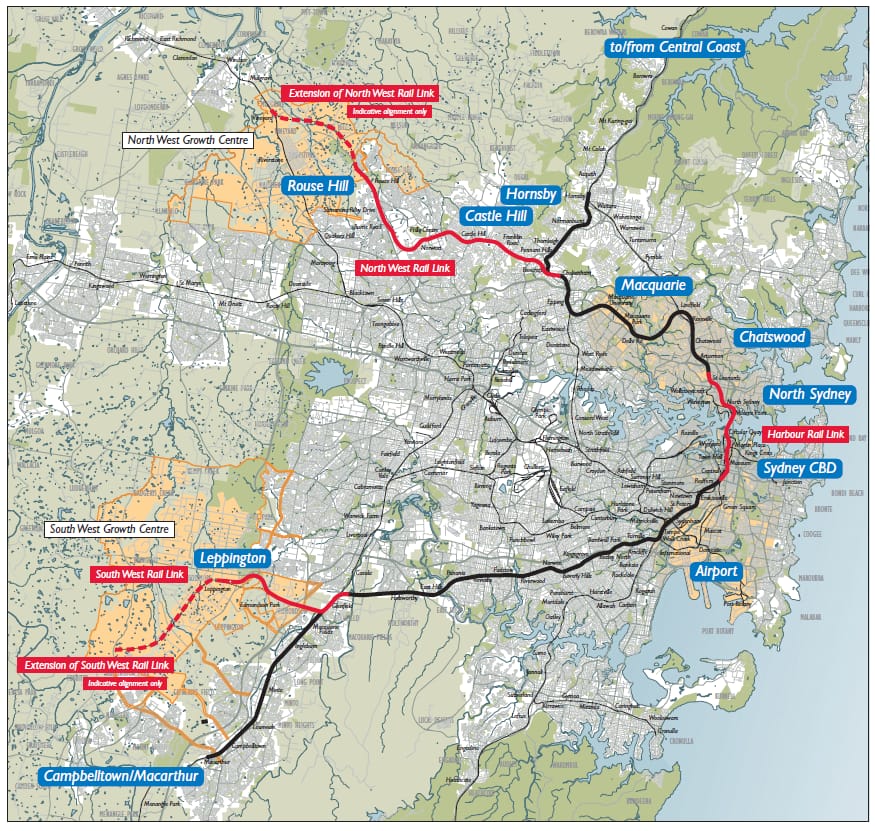 MREP: with Acknowledgement to Sandy Thomas

Do we need more Rail?

Overall demand for public transport has increased over the last few years in all capital cities with public transport networks. Increased public transport demand is normally associated with general downturns in the economy as people seek cheaper forms of transport. However, the Sydney system is essentially operating at maximum capacity and has consequently “flat-lined” in terms of patronage growth.

In addition, patronage modelling suggested the North West Rail Link component would, on average, attract about 215 passengers from the Hills district off each peak period train on the Western line from Parramatta, thereby permitting greatly improved services to the CBD for Western Sydney commuters. The additional and faster services from Campbelltown and Chatswood to the CBD, along corridors that already have some of the most dramatically overcrowded trains in Sydney, would similarly have provided vital capacity relief.

Post MREP, it was considered most likely that future rail expansions in Sydney would focus on entirely separate new lines, operating independently of the CityRail/Sydney Trains network and quite possibly using single-deck trains to permit more steeply climbing routes, as had been advocated in the highly regarded 2001 Long-Term Strategic Plan for Rail prepared by the then NSW Co-ordinator General of Rail, Ron Christie (“the Christie report”).

Plans are underway to increase the capacity of the existing Sydney Trains network, firstly via operational (eg. timetabling) improvements and then via various network improvements (including a more modern signalling system which of itself would result in a significant improvement in network capacity).  However, the step-change in network capacity associated with a second harbour crossing will eventually be required.

So should we invest in road or rail? Assuming no funding constraints, the better answer to this question is “both” because (a) each transport mode is more effective in performing different tasks and (b) the performance of each mode affects the other mode.

As a mode of transport, private motor vehicles work best in moving people to and from dispersed destinations over a long period of time. However, this poses a problem when a major arterial road happens to pass through a major centre, resulting in a high proportion of through traffic. This is the worst of both worlds – lots of cars in a dense centre with an origin and destination that are not well served by public transport. That is where ring roads come in – they allow these roads to bypass these major centres, while car users still reach their destination. This maintains transport to and within the centre (ideally) focused on public and active transport (walking and cycling).

Thus, to the extent that WestConnex forms an effective part of Sydney’s Orbital (ring-road) Network, the scheme in concept appears to be an appropriate medium term enhancement for the roads network.

Public transport works best in moving large volumes of people to or from a single destination in a short period of time. In essence, the Sydney Trains network performs best when moving passengers from the North Shore and from the West to the CBD.

The MREP concept was essentially designed to extend and enhance both the North Shore and South West corridors and to take the pressure off the Western corridor. A second Sydney Harbour crossing would provide a step-change increase in the capacity of the Sydney Trains double deck rail network sufficient for the next couple of decades. However, as a separately configured single-deck based scheme, there are serious questions as to whether a Rapid Transit only crossing constrains the medium term capacity of the existing Sydney Trains network and therefore represents a sub-optimal enhancement to Sydney’s rail network.

To illustrate the performance interrelationships between road and rail we can refer to some work carried out by Michelle Zeibots, a researcher at the Institute for Sustainable Futures at the University of Technology, Sydney (add link). When comparing official travel speed data from the Roads and Traffic Authority and on-time running statistics for CityRail (now Sydney Trains), she found a pattern between the decline in the performance of CityRail, the growth in congestion and the decrease in average road travel speeds during the morning peak commuting period.

Between March 2004 and March 2005, when the CityRail system “melted down”, on-time running fell to between 50 per cent and 55 per cent. At the same time, the average traffic speed on seven major roads – including the F3 between Wahroonga and Newcastle, the M4 between Strathfield and the Blue Mountains, the M5 between Liverpool and Beverly Hills and the M2 between the Hills district and North Ryde – fell from 34km/h to 31km/h in the morning peak period.

Between mid-2003 and mid-2004, another period of chronic rail service unreliability, there was a 2.2% slump in train patronage and an average 4% increase in traffic volumes on motorways. Note that in mid-2005, the Government changed the definition of on-time running: trains that arrived within five minutes were considered punctual. A new timetable, introduced later that year, slowed the trains permanently.

These results illustrate travellers’ typical behaviour in seeking out and using the quickest mode of transport in completing a journey, assuming the relative cost (or at least perceived cost) of each mode is not too different.

What else do we need to consider?

There are a number of complex and interrelated additional issues that need to be considered when evaluating transport network investments. These broadly include:

One last and in excess of $20Bn question to consider – is there enough funding available to the State of NSW to procure both Westconnex and the Rapid Transit scheme?