What’s going on in the Infrastructure Industry – Revisited 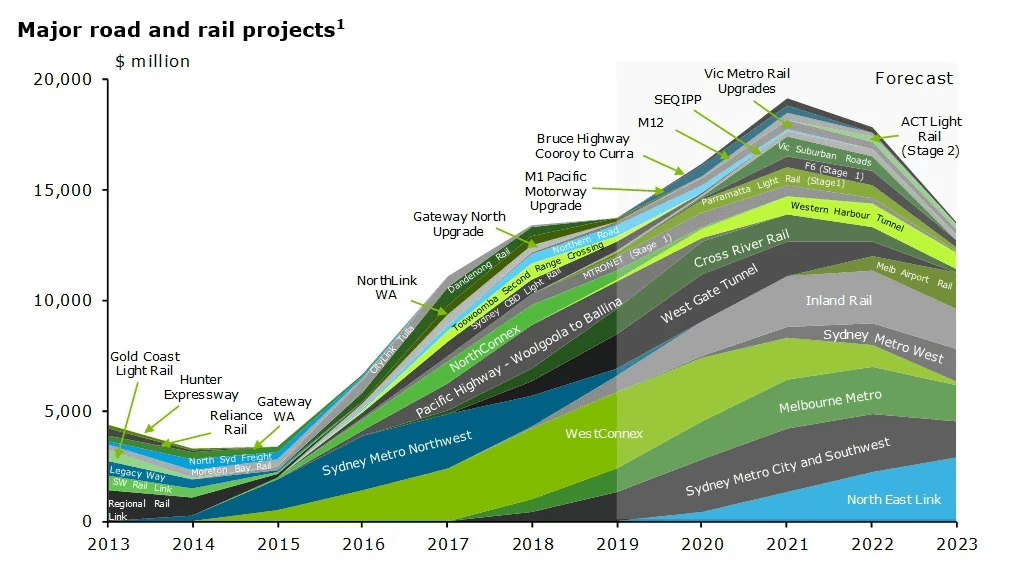 I recently reviewed an article I wrote in early 2015, exploring the goings-on in Infrastructure Construction.

It was a timely check in, given the great deal of discussion throughout the Engineering and Construction industry concerning intensifying “margin squeeze”. In an industry where a significant proportion of major project work let to Tier 1 and 2 contractors is subcontracted to third parties, the margins at which projects are secured significantly influence the margins earned by the rest of the supply chain.

This issue can be illustrated using the Case Study of major transport infrastructure. Applying basic market principles of supply and demand and taking into consideration the ramp up and sheer volume of work pending and in progress (refer the illustration above), one could reasonably infer that contractors who have won major road and rail projects in Australia since 2015 should at minimum be generating reasonable returns for work delivered.

How then to explain the following anecdotal evidence?

In the case of the transport infrastructure construction industry, State and Commonwealth Governments shape the market as Buyers of major roads and railways on behalf of users.

While the industry continues to progressively embrace technology, it has yet to be disrupted by a Substitute (such as alternative transport / mobility means?) that fundamentally alters the demand for physically constructed transport infrastructure assets.

The Infrastructure construction industry has traditionally been characterised by fierce competition between Existing Rivals, driven by episodes of “feast” and “famine” in line with rising and falling economic conditions.

The last two decades have seen a range of new Entrants to the local industry, including major International contractors such as ACS, Acciona and Ferrovial from Spain, China’s CCCI and Salini Impregilo from Italy. Shifts in the following specific market barriers have enabled these Internationals to enter and/or consolidate their position:

Market entry by the major contractors (at least the more successful ones) has been via local business investment / acquisition. Consequently, there has not been a material shift in availability of local Supplier resources (specifically, staff and workers as well as plant & equipment). Subcontractor resources have largely grown organically to meet industry demand and are contracted in by the majors to meet specific project requirements.

What Does this All Mean?

In summary, the evidence suggests the (unsurprising) conclusion that the increased number of recent market entrants has resulted in increased downward pressure on major project margins. Interestingly, the major contractors’ widespread adoption of Joint Ventures “of convenience” in responding to Requests for Tender (so as to access needed skillsets and reduce balance sheet risk for large work packages) has not noticeably reduced this pressure.

In the absence of Government intervention in response to International industry consolidation and consequent concerns about foreign ownership and control, downwards margin pressure is likely to remain for the foreseeable future. Note that a continuing stream of exiting major contractors (as would the business failure of a major contractor) would be expected to reduce margin pressure.

How should we Respond?

Porter proposes that, once having assessed the forces affecting competition and their underlying causes, a strategist can identify a given company’s strengths and weaknesses and then devise a plan of action. To clarify, overall industry attractiveness does not imply that every organisation in a given industry will return the same profitability. Businesses can apply their core competencies, business model, network and/or innovative capability to achieve a profit above (or below) the industry average.

As an example, the move by a major International contractor in late 2016 to consolidate via acquisition is a typical major player response to market pressure. A series of recent project wins appears to have – so far – validated this approach.