What’s going on in the infrastructure construction industry?

It’s a time of great change in the infrastructure construction industry in Australia and most players are acutely aware that things are happening. So what’s actually going on?

Theoretical models can be very helpful in analysing a problem or considering issue from a strategic perspective. One relevant model in this instance – my favourite because of its simplicity – is known as “Five Forces”. The model is used to analyse the nature of competition within an industry. The model draws upon industrial organisation economics to derive five “forces” that determine the competitive intensity of an industry and therefore its overall attractiveness (read profitability).

The analysis was developed by Michael E. Porter of Harvard University, who described the model in his 1979 Harvard Business Review article “How competitive forces shape strategy”. Porter developed his Five Forces analysis in reaction to the widely used Strengths/ Weaknesses/ Opportunities/ Threats (SWOT) analysis, which he believed lacked appropriate rigour.

Porter identified five factors that act together to determine the nature of competition within an industry. These are: 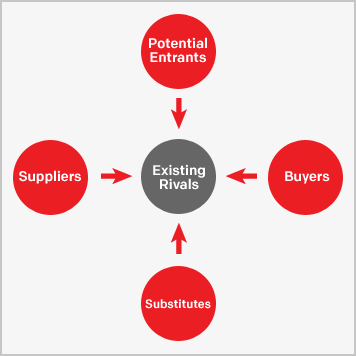 Porter referred to the “five forces” as the micro environment, consisting of those factors surrounding a company that affect its ability to serve its customers and make a profit. A significant change in any of the forces normally requires a business to re-assess its industry position. It is reasonable to consider that overall industry attractiveness does not imply that every organisation in a given industry will return the same profitability. Businesses are able to apply their core competencies, business model, network and/or innovative capability to achieve a profit above (or below) the industry average.

Let’s consider infrastructure construction as an industry, shaped by Commonwealth and State Governments who as Buyers procure infrastructure such as roads, railways, water storage and delivery, electricity assets etc on behalf of taxpayers. The Suppliers are the contractors, large and small, who compete for (mostly) by tender to construct and/or maintain these assets.

Over the last two decades we have seen a gradual but increasing arrival of new entrants into the industry in the form of International contractors such as ACS and Ferrovial from Spain, Salini Impregilo from Italy, Suez Environnement and Veolia Environnement from France to name just a few.

Barriers to entry are important in determining the threat of new entrants to a given industry. Porter defines six major sources of barriers to entry:

So what’s recently changed in the infrastructure construction industry? International organisations have been encouraged to enter by the relative strength of the Australian economy as well as Government relaxation of regulatory and legal restrictions such as bespoke local standards and stipulated minimum local content requirements.

So let’s consider the “threat” from the perspective of existing suppliers (contractors) in the market. The answer depends on how “powerful” the existing suppliers are! Suppliers find themselves in a powerful position in an industry when:

So it’s safe to say that supplier power is weakening and competitive rivalry is intensifying in the infrastructure construction industry! A fairly obvious conclusion, but what to do about it?

Porter proposed that, once having assessed the forces affecting competition and their underlying causes, a strategist can identify a given company’s strengths and weaknesses and then devise a plan of action. This may include:

So as a business owner or executive manager, what specifically do you need to do?