Productivity improvement in Engineering & Construction – why is it so important? 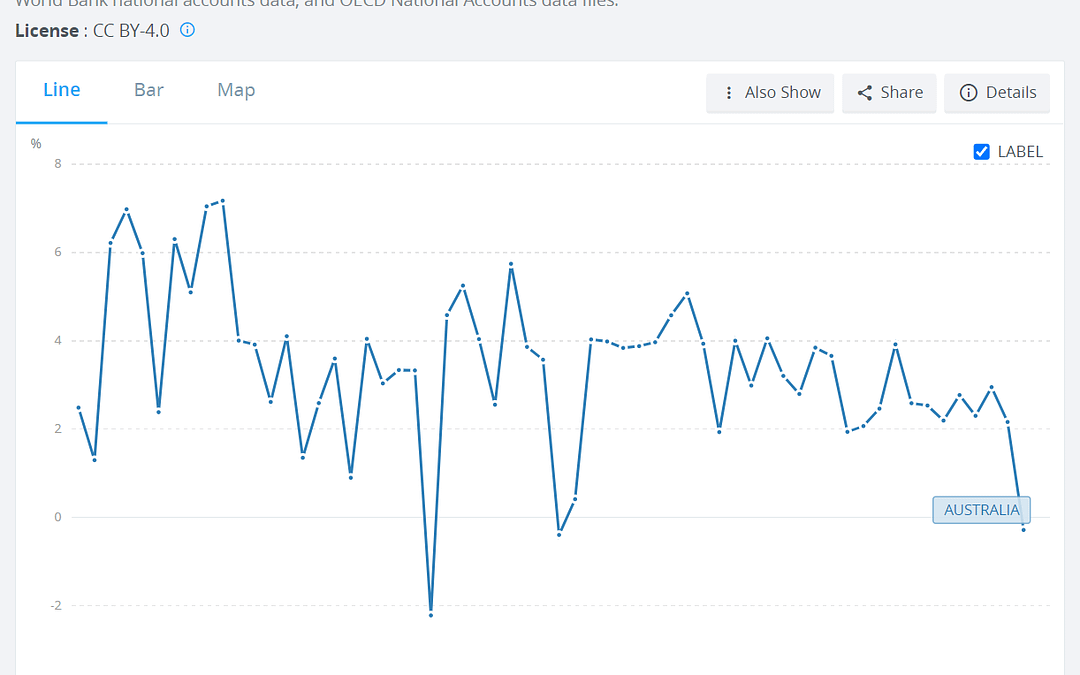 I’ll let you in on a secret: I’m finding it hard to remember what life was like prior to the onset of the dreaded “C” situation. Can you recall what was happening across Australia 5 years ago?

I’ll summarise with help from my archives and more specifically a 15 October 2016 article by the ABC’s Michael Janda. Refer to his article: Population growth masking weak economy, making households worse off: CBA economist

In 2016 we were celebrating Australia’s post-GFC economic performance. The reality of growth, as shown in the chart above, in Gross Domestic Product (GDP) at around 2.5% however, was lower than the average 4% we had grown accustomed to.

The “celebratory” feeling certainly did not translate to many households. Why was this so? With poor average wages growth, low household savings and high costs of living (particularly rent or mortgage servicing costs), many felt close to the edge and not in a position to increase discretionary spending.

What was actually driving headline GDP growth? A high rate of immigration – with total migration at a multi-decade high of just under 190,000 people per annum – was fuelling increased consumption.

A transport infrastructure construction programme was slowly gaining momentum up and down Australia’s Eastern Seaboard. Chronic congestion across the roads and rail transport networks in the major cities was fuelling widespread impatience with delays in commencing major transport projects such as the Level Crossing Removals program in Victoria, Westconnex Motorways in NSW and Cross River Rail in Brisbane. Concerns were rising regarding the industry’s ability to deliver.

GDP performance is tremendously volatile at present, borne of “stop start” business activity. Interest rates are at the bottom of the cycle and there’s a dearth of opportunities to spend money (anyone been anywhere new lately?).

With household savings increasing there’s less immediate concern regarding wages growth. However, there is widespread community uncertainty regarding how long our current situation borne of COVID-19 will last and what a “new normal” might be. Suspicions are increasing that we may be seeing a generational shift in the way we go about business and life.

Travel congestion is not an issue for the time being. However, with metro rail patronage likely to recover quite slowly, we’re highly likely to experience major spikes in roads usage as the States progressively reopen.

The pipeline of infrastructure work continues to expand, with more major infrastructure project announcements pointing to a continuation of the “big build” across the country. Indeed, it is becoming apparent that construction industry activity is the critical driver of overall economic activity.

Construction site inefficiencies borne of COVID-19 Safety Plans and supply chain disruptions are resulting in completion delays for in-progress projects. The combination of zero net immigration and increasing construction activity is resulting in looming staff shortages and a consequent rapid escalation in wages and staff costs. In short, a yawning gap is opening between supply and demand.

As an industry we’re typically very good (some would say best practice) at coming up with short-term tactics and workarounds to deal with looming challenges. Casting further ahead though, how might the gap between supply and demand be bridged?

On the supply side, consider the extent to which improved productivity might improve the situation.

“Productivity is the most powerful tool we have for improving our economic wellbeing. It represents the organisation, capital and technology we apply in the production of the things we need and want…” and

“Our future prosperity depends upon how well we do at growing more productive – how smart we are in organising ourselves, investing in people and technology, getting more out of both our physical and human potential.” 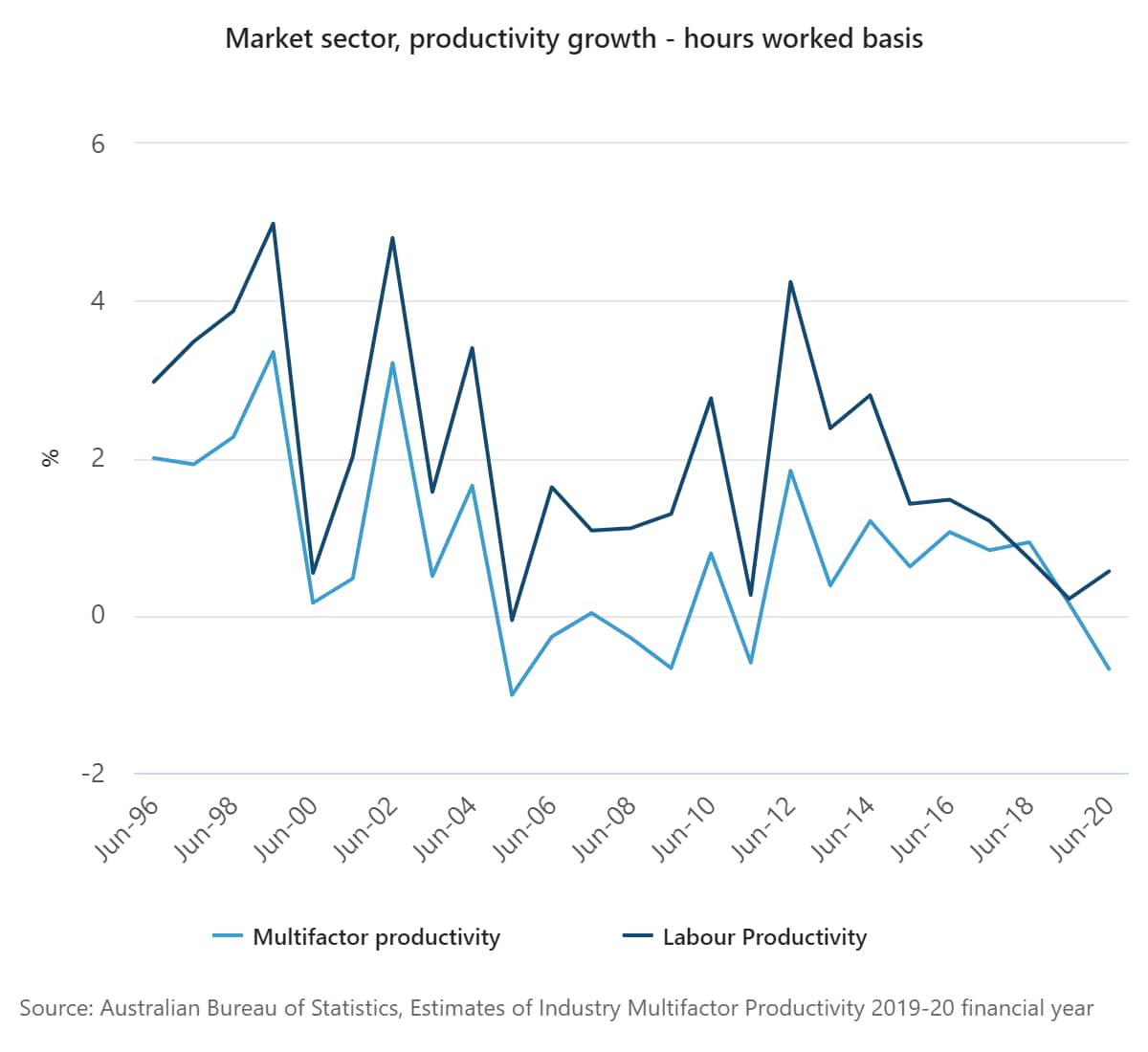 Referring to the chart above (sourced from an earlier article; Please remind me why all of this transport infrastructure is good for us?) unfortunately both labour and multi-factor productivity has declined since FY2012. There is much scope here for improvement.

Referring to McKinsey & Company’s publication “Australia’s Infrastructure Innovation Imperative” construction industry R&D investment is historically less than 1% of revenue, in comparison with (say) 4.5% for the aerospace industry. Considering that for advanced economies 80 per cent of long-term productivity growth is due to advances in “technological innovation”, increased investment in technology appears to enable improved productivity.

If we consider the persistent cost pressures experienced on major projects, I’m inclined to believe that we will see a much greater focus on input costs and more specifically labour inputs going forward.

Local wage rates – and to a lesser extent local salaries – are not directly exposed to the effects of international competition. In this sense Australia operates as a relatively “closed” economy without the competition between more mobile workforces across (say) the European Union. Accordingly, the key drivers of productivity improvement are most likely to be greater augmentation and/or replacement of labour with mechanised solutions (machines) and technology enabled improvements in the way site labour is organised and integrated with equipment and materials.

If we turn to the demand side of the infrastructure challenge, TfNSW’s Easing Sydney’s Congestion program is a great case study for responding to congestion management challenges across Greater Sydney’s roads network. Typical initiatives include:

In short though, the signs point to improved productivity as our longer-term saviour, would you agree?