Industry Consolidation in Engineering & Construction – what are the Risks? 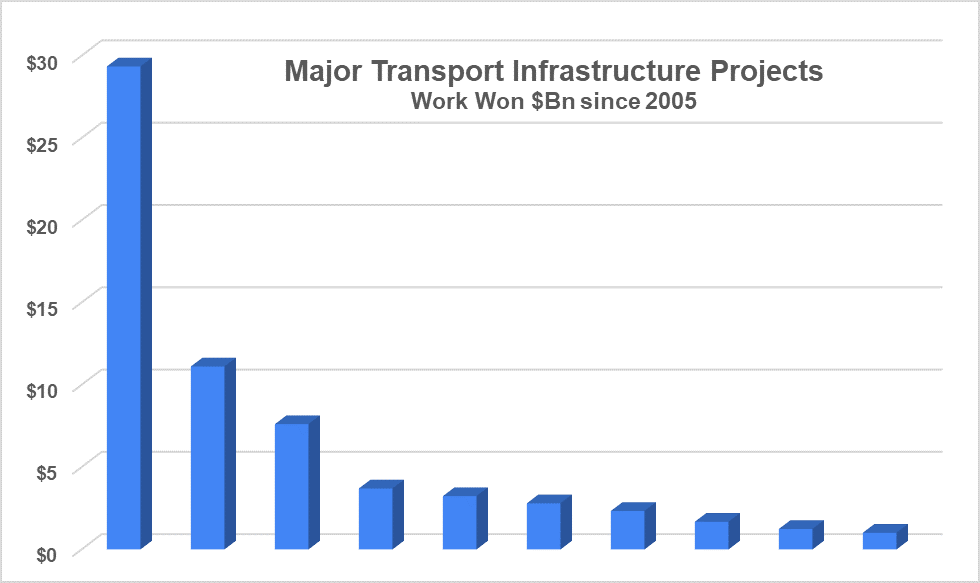 During turbulent economic times like these, the importance of Engineering and Construction to Australia’s ongoing prosperity becomes truly apparent.

Apart from producing around 9% of Australia’s Gross Domestic Product, in 2019 the Construction industry employed over 1.15 million workers.

SO consider the chart above, which illustrates the share of major Infrastructure project work awarded to top tier Engineering & Construction contractors since 2005, grouped by ultimate Corporate ownership.

Note that the column labels have been deliberately left out. Based on its shape alone, what do you think this chart shows?

One key takeaway for me is the extent of consolidation that has occurred in the local Infrastructure industry over the last 15 years The dominance of one major player is illustrated on the left-hand side of the chart.

Consider the shape of this chart in light of what is considered to be a typical mature industry structure. If we assume open competition, a mature industry is typically dominated by 4 major participants (think for example the “Big 4” Accounting firms in Australia). The 4 major players, adopting one of four primary market Positions (Product, Price, Market and Service) typically share 80% of the market.

Now consider what’s going on towards the right-hand side of the chart above – the remaining 20% of the market left to everyone else.

For this I’ll draw on some information published by Australian Owned Contractors (AOC), a group of 12 local mid-tier construction companies.

A healthy local industry is one in which investments are being made in knowledge, skills, expertise and capability.

SO what issues do you think are likely to show up in our industry?