Is business all about luck? 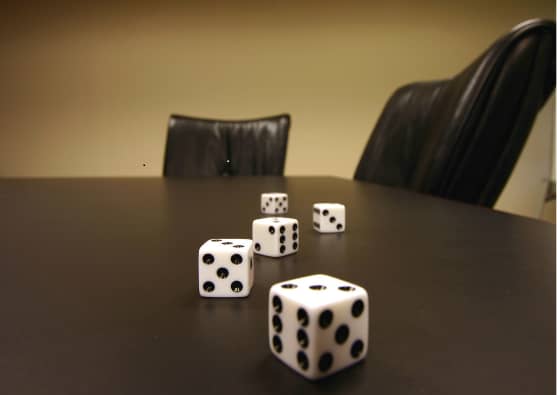 “I believe that business, like many of life’s challenges, is all about luck. Successful business owners seek out the right business model, work hard and smart in implementing their ideas and consequently are well prepared for when they get lucky”.

You might be interested to know that there is quite a deal of science as well as cognitive psychology embedded in this statement….

In illustrating these concepts, I will borrow an excerpt from “Thinking Fast and Slow” by Nobel Prize winner Daniel Kahnemann. This fascinating book explores how we as humans exercise our judgement and make decisions, with our apparently fully rational brain blissfully unaware of the unconscious effects of biases that shape the outcomes.

Great Success = a little more Talent + a lot of Luck

Kahnemann then proceeds to illustrate these equations using the example of a golf tournament. For simplicity’s sake the average score of the competitors is assumed to be at par of 72.

A player who did very well on Day 1 closed with a score of 66. An immediate inference from this score is that the golfer is more talented than the average participant in the tournament. However, the formula for success above suggests that another inference is equally justified: this golfer probably enjoyed better than average luck on that day. If you accept the equation above, either conclusion is equally warranted.

By the same token, a player who scored 5 over par on that day may be weak and had a bad day. Of course, it is entirely possible that a player who scored 77 on the same day is actually very talented but had a very bad day. Uncertain though they are, the following inferences from the score on day 1 are plausible and will be correct more often than they are wrong:

So, what can be predicted for the score on day 2? Given the golfers retain the same level of talent on the second day, the question becomes one of luck and there is no way of predicting the golfers’ luck on the second (or any) day. Accordingly, your best guess must be that it will be average, neither good nor bad. This means that in the absence of any other information, your best guess about the players’ score on day 2 should not be a repeat of their performance on day 1. This is the most you can say:

We also expect the difference between the two golfers to shrink on the second day, although the best guess is that the first player will still do better than the second.

This is regression to the mean in action. The more extreme the original score, the more regression we expect, because an extremely good score suggests a very lucky day.

For further evidence of the same effect, look no further than Test Cricketers’ career batting averages, the very best of which are clustered around 50 runs per innings (for an explanation of Don Bradman’s exceptional average of 99.94 you may wish to refer to “Outliers” by Malcolm Gladwell).

In November 2015 David Warner scored 244 Not Out during a Test between Australia and New Zealand (surviving what was reported as 3 clear chances to be dismissed). The day after and despite his stated intention to bat on, he advanced his score by just nine runs before getting out. Was this just (as the commentators suggested at the time) that he was just tired from the previous day’s efforts or that the pitch had suddenly come to life or that the bowler had found renewed energy? Or in a sport where luck has a very significant influence on overall result, was this just regression to the mean?

In short, we invent stories, or causal links, for performance (our brains are actually wired to be very good at it) when in reality all we are most probably observing is regression to the mean.

So back to the business challenge: assuming we have chosen the right business model in an appropriate industry sector, if we fully show up with our talent as business owners and are aware that great success is largely driven by a lot of luck, how are we to improve our chances of success?

The scientific answer is HARD WORK, focusing on maximising our talent, and being ready for the luck when our share inevitably comes our way.