High Speed Rail in Australia – a word of caution….. 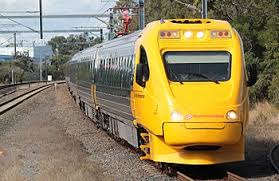 There’s plenty of industry and public support for the concept of High Speed Railway in Australia. As a cautionary note, let’s consider the proposition from a different perspective and address the “elephant in the room” issue that must be dealt with, should the vision of High Speed Rail in Australia be successfully realised.

I received quite a few responses to the recent article on the potential for High Speed Railway in Australia, with plenty of industry and public support for the concept. As a cautionary note and a means of stimulating further debate, let’s consider the proposition from a different perspective and address the “elephant in the room” issue that must be dealt with, should the vision of High Speed Rail in Australia be successfully realised.

The vision held by supporters of High Speed Railway (HSR) services is of interconnected cities on the East Coast of Australia, between which passengers can move with little effort and in an energy efficient manner. The key challenge in realising this vision is to reconcile the benefits of the system, some of which are not recognised under the rules of commonly accepted investment evaluations, with the considerable construction and operating costs. Internationally, it is commonly cited that only two lines, the Paris-Lyon line in France and the Tokyo-Osaka Line in Japan – connecting densely populated locations in both instances – have earned back their initial investment costs.

Accordingly, it is likely that HSR investment in Australia will need to be subsidised by taxpayers. On this basis, Government will have a key role in determining the rules of the game under which the HSR system would operate. The existing arrangements under which our roads, rail and air transport systems operate will need to be considered, modified and in some cases completely overhauled to enable a new HSR system to happily co-exist alongside existing transport modes.

Here are a few examples of the issues to be considered:

A recent International case study reported in the January edition of the “International Rail Journal” (let me know if you would like a copy of the article) highlights the potential for unintended consequences associated with introducing High Speed Rail into an existing network:

There is widespread support for continued expansion of the French TGV “hub and spoke” network operated by SNCF Mobility. TGV is seen by much of the public as promoting economic development in the regions and reducing transport’s overall impact on the environment. However, a recent French Court of Auditors report into the TGV network has highlighted falling patronage and a significant reduction in operating margin since 2008 (a period coinciding with the GFC) as access charges rise as a percentage of operating costs. Significantly, low cost airlines are re-capturing market share from TGV services on busy routes. Furthermore, the ageing and increasingly marginalised Balance of Territory (TET) regional rail network operates a network of what are now 40 loss-making Intercity services. These services have been “squeezed” between TGV operations and low cost bus operators who, since the liberalisation of the long-distance bus market in January 2013, have been able to compete with rail operators and capture market share. Long distance bus operators’ fares are based on fees and taxes that do not fully reflect the cost of the roads network.

So the decision for or against HSR essentially comes down to public policy choice, and as voters and taxpayers we have both a right and a responsibility to make a choice. We will need to spend time considering the issues so that we can make an informed decision……